In the following sections we detail the three softwares. 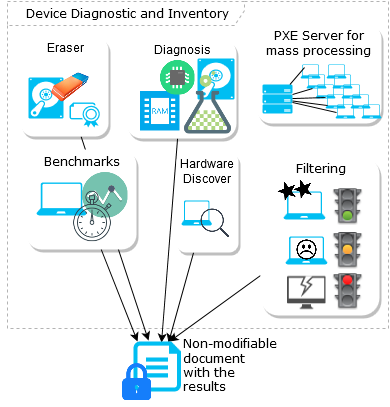 The eReuse.org Workbench is a toolset that assists in registering, refurbishing, and tracking devices. It captures hardware characteristics (like the serial number) of devices and their components, rates the devices, securely deletes data, and installs GNU/Linux OS when possible. With its self-booting start-up, you don’t have to worry about which operating system is installed. Just boot your device through the network with the PXE Server and test and benchmark your system hardware, capture characteristics for rating and the serial number for traceability and reporting.It processes detailed hardware information at component level. We achieved a high success rate in automatically capturing these hardware characteristics and serial numbers; e.g. 99.3% for network card and hard disks, and 87% for manufacturer number for diverse components is automatically detected in 87% of cases, and from these 97% is unique. When refurbishing a device for reuse, operators process them through the eReuse.org Workbench, executing the tools that they see fit for the type of device, and finally the Workbench Server generates a reuse report containing all the gathered information. This report is then uploaded to the distributed cloud software; the eReuse.org Devicehub, which we explain in the next section. The Workbench toolset is developed in Python 3 and Android with open-source technologies and operative systems such as Debian 9 over PCs and Raspberry Pi.

The tools of Workbench are: Workbench a computer, Workbench Server, Android App and Photobox.

A software that executes on a computer and, without human interaction, automatically executes the following tools:

A software that manages executing the Workbench PC on multiple devices (up to hundreds) through a local network. Workbench Server is usually served through a Box, a mini-computer that acts as the point of management in the warehouse when preparing devices to reuse.

A smartphone and tablet Android app that allows to contribute details about the specifications of a smartphone to the eReuse.org/Usody.com initiative, preserving user privacy. The collected details facilitate second hand reuse and the elaboration of statistics about actual mobile phone durability. USOdy.com, is an entity/company federated to eReuse that offers software and device management services (data processing) and contributes with data to generate industry statistics.

The eReuse.org DeviceHub is a Device Asset Management System, offered as a web app and focused in efficiently managing the circular life-cycle of devices –reusing and recycling. Main objectives are:

DeviceHub recollects devices from the reports of the eReuse.org Workbench and other integrated systems and manages their full workflow, logistics. It manages and prints certificates and customer-friendly reports, places and packaging, and has a plug-in system. Devicehub manages and prints certificates and customer-friendly reports, it manages lots of devices, and it can design and print smart tags with QR and NFC technologies that boost efficiently and avoid leakage. You register the devices using the Workbench, a companion Android App, through an system integration or manually; place them in different places (ex. the warehouse); and perform events to them (ex. “this device has been repaired”, “we have moved the device to the office of the client”, etc.). Devicehub are federated and autonomous, and interact with external systems (like other Devicehubs) to manage the different processes involved in reusing and recycling, like disposal or external reusing. 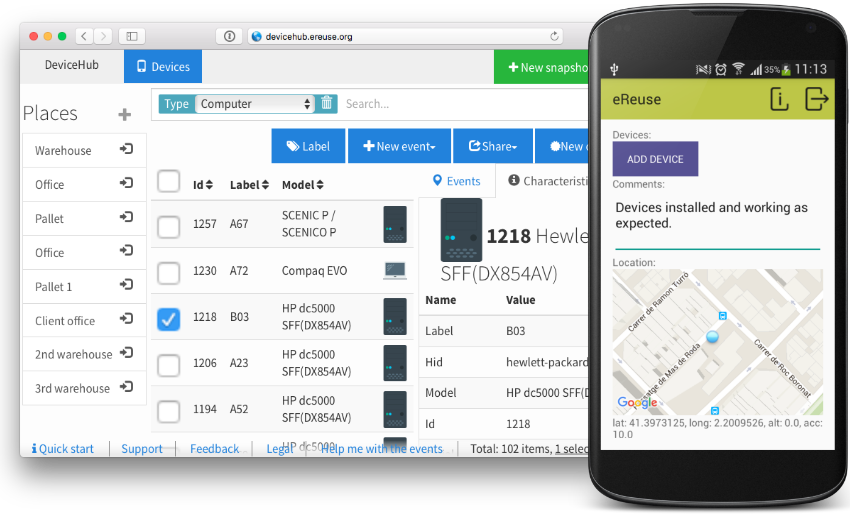 The Global Record of Devices 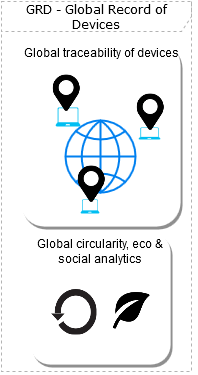 The Global Record of Devices (GRD) is an auditable (and replicable) online log that maintains a global list of traceability information about devices, so it can assist when there is leakage or similar problems. The GRD works with open-data and is designed to be used with external users who want to report traceability information. At the same time, GRD aggregates traceability data with the objective of using this data as inputs for indicators measuring circularity indicators. It is comparable to a distributed blockchain. GRD provides a REST API to allow ITAMS, as DeviceHub, to report the life cycle of devices, environmental responsibilities for organizations, etc. It collects from each device, at least, the geographical paths it has followed (not in detail to preserve privacy), the DeviceHub where it has been stored, the collection points where it was located before its final recycling and, in the case of computers, the record of its components. GRD exists as a prototype and it is the aim of this project to build it using Everythng.

A smartphone and tablet Android app that has two functionalities.

A machine that assists in rating the appearance of a device by taking pictures from devices from different views, like frontal, sides and rear. A developing AI can detect scratches and imperfections from the pictures and automatically rate the devices.